You can’t stay in Byron Bay and not take a visit westward into the hills. There’s quaint villages, weekend farmers markets, and gorgeous places to go for picnics and take a bush-walk.

There are spectacular views across the farmlands and wilderness and it has a beautiful slower pace. It even makes Byron, which is pretty laid back, feel like it’s all hustle and bustle.

There are old growth rainforests to explore, which provide a haven for the native rainforest animals.

And of course who (nut allergy people excepted) doesn’t love the macadamia nut. which grows in plentiful supply up there. I fell in love with this area because, randomly, we one day bought a macadamia farm on the outskirts of a lovely little village called Dunoon.

From Dunoon there are so many places to explore.

The dam supplies the drinking water for the local region and is a great place to go for a picnic and then wander the trails that meander through the Rous Valley Rainforest Reserve. There are plenty of walks that range from 20 minutes to 2 hours for varying levels of fitness.

Sometimes I used to love just taking some food and drink, a good book and just lie on the grass for hours contmeplating and reading in the peaceful setting.

These falls and the swimming hole were a bit of a local secret when we first moved up, although one ofthe backpacking tours discovered it so in summer around 3pm it gets inundated with backpackers touring the hinterland. But go to early in the morning and the old dude who lives across the road like a brisk morning swim… au naturelle!

We used to take the dogs down there.. til one jumped off the top of the waterfall – about 5 metres.. lucky he just scared the bejeesus out of himself..and hubby!

If the water has been flowing and the whole at the bottom is pretty full many people jump off the rocks, not that I condone that sort of thing.. really. But you know, we do dumb things when we are young.. or young at heart. Minyon Falls are situated in the Nightcap National Park. The view from the lookout is the best in the area; not only of the falls themselves, but on a clear day you might be lucky to see all the way out to the coast.

From the lookout, watch the cascades flow over Minyon Falls to a deep palm-shaded gorge roughly 100m below. The tops of the cliffs are forested with Australian eucalypts, like blackbutt and scribbly gum. At the base of the falls is a beautiful natural pool that was made for swimming.

Minyon Falls is a great place for a quick stop, but if you’d like to spend longer at this pretty place, there’s a picnic area with plenty of shady trees, barbecues and picnic tables. There are also a couple of bushwalks that leave from the picnic area which take you down to the base of the falls.

The World Heritage-listed Protesters Falls are also nestled in the ranges of Nightcap National Park , and have walking tracks that wind through some of the most spectacular rainforest around the area. It’s a great place for family picnics. The falls were named after the Terania Creek protests in the late 1970’s which I remember as a child. The protests resulted in some of the most pristine patch of rainforest being saved as well as saving a number of endangered frog species in the area.

We considered buying out in the rainforest along the road to the falls at one stage.. but in the end the isolation, not to mention leeches 24 hours a day resulted in owning a macadamia farm instead!

Now we’ve moved away, the Crystal Castle is on my must visit every time we go back. Also known as Shambala Gardens, it has some of the biggest and most beautiful crystals in the world. The energy from this place is simply amazing.

The gardens are landscaped tropical gardens that also have stone statues, crystals (some 500 million years old), a labrynth and stone spiral to explore as you wander through.

I collect crystals so if you love them..take plenty of money! That’s the voice of experience talking!

Okay I’m a market junkie from years back.. and hubby mostly puts up with it. OF course when you get to the north coast, there are so many great markets to choose from. Channon Markets, in the village of The Channon is one of my favourite and people come in from all over the region.

The markets are on the 2nd Sunday of each month and have been running for 35 years.

The Market was originally set up to trade and barter goods between members of the community and its creation also provided a meeting place for like-minded people explore current environmental issues. The Channon Craft Market has grown enormously in size and reputation since then.

Well I hope you enjoyed a quick tour around some of my favourite places in the Byron Bay hinterland and if you haven’t had a chance to visit yet.. it really is worthwhile.

This post originally appeared on Steemit and can be found here

Be the first to like.
Like
Unlike
Hiking waterfalls 2017-07-14
The Amateur Adventurer
Previous: Weekends in the Blue Mountains – The Three Sisters
Next: Italy – A Tuscan Treat 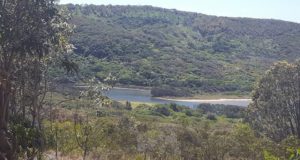