All Roads Lead to Rome

“The road is all but gone, destroyed by time, neglect, and the incursions of modernity; to travel the Appian Way today is to be a seeker, and to walk in the footsteps of ghosts.” Robert Kaster – The Appian Way Stand for minute, eyes closed, on the outskirts of Rome on the ancient paving stones that make up what was once the super-highway of Europe.

You are transported back to a time, centuries ago.  Listen to the sound of wheels on the stone road, people bustling down the elevated side-walks, and scrambling out of the way for the likes of Julius Caesar to pass. Listen to the cries of 6000 slaves – the Army of Spartacus – crucified along the 200km stretch between Rome and Capua.

It gives you chills.

This is the Via Appia Antica. The Appian Way. Today, it’s the sound of tourist buses and car engines (It’s a great idea to go on a Sunday when the Way is closed to vehicles). You can hear the incessant clicking of camera shutters capturing what remains of the paved stones, ancient mausoleums and underground catacombs. Rome’s tourists make a pilgrimage along the Appian Way, when they are feeling somewhat energetic and desire to get out of the city into the surrounding countryside.

The road is one of the earliest and most strategic in Roman history and connected Rome to Brindisi in south east Italy. To this day the Via Appia has the longest stretch of straight road in Europe (62 km). The entire road stretches 560km If you want to make the most of your time along the Way- then plan ahead, or at least plan your return strategy.  While waking up one morning and just deciding to go for a “really” long walk is well and good for spontaneity – you’ll be less enthusiastic at four in the afternoon, after 21kms of walking and no idea how to get back to that big city you can just see off in the distance over the horizon! (This is when Sunday without cars is not as great an idea as you would have first thought!)

There are some key monuments you really want to make sure you cover – so a guide book from the Visitor Centre is a must.

Above ground are the impressive tombs that important people built for themselves and their families, the notables ones being the tombs of Cecilia Metella, Marcus Servilius, Romulus and Sextus Pompeius Justus.  Other monuments include the Temple of Hercules, the Quo Vadis church where St Peter is said to have met Jesus and Villa De Quintilli, with it’s  baths, friezes and sculptures. But there is as much going on underground as above.Below the street are miles of tunnels – known as catacombs – where the early Christians buried their dead and, when necessary, held secret church services. Several of the catacombs are open to the public and on a guided tour led by local priests and monks, visitors can view ancient burial niches and a handful of remaining examples of early Christian art. The Appian Way is known as the “Queen of Roads” and while it is only one of many roads that lead to Rome it is by far the most legendary.  Take a trip down the road and reach back through history to one of the greatest empires of all time.

1 person likes this post.
Like
Unlike
Appian Way history Things to do walks 2014-07-20
The Amateur Adventurer
Previous: UNESCO: Angkor
Next: Aya Sofya – Church of the Divine Wisdom 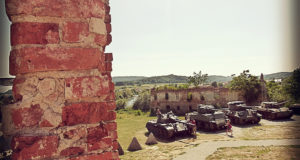